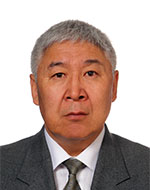 President, Kyrgyz Mining АssociationIshimbay Chunuev graduated from the Leningrad mining Institute in 1978, specialty “Mining engineer-surveyor”. From 1978 to 1992 he worked at the Frunze Polytechnic Institute as a teacher, head of the Department. 1992-1995 doctoral studies in the Academy of Sciences of Kyrghyz.SSR. From 1995 to 2011, he worked at Kumtor Operating Company as a chief surveyor, Deputy Manager of open pit mining and underground mine Manager. From 2012 to 2013-Director of the state Agency for Geology and mineral resources of the Kyrgyz Republic. Along with the production activities constantly combined scientific and pedagogical work at the University. In 1992 he organized and headed the Department of Industrial ecology. In 2000, he opened the Department of geodesy and mine surveying at the Institute of mining and mining technology named after academician, where he is currently a Professor and head of The Department. Since 2015, he has been elected President of the Kyrgyz Mining Association (KMA) and President of the Kyrgyz society of subsoil experts (KOEN) since 2017. Board member Eurasia Union society of experts on subsoil use (ESOEN). He is an active participant in the implementation of modern computer programs in the educational process and in production, as well as CRIRSCO standards in Kyrgyzstan. The initiator of the development of the Mining Code in Kyrgyzstan and movement “As geologist (Junior geologist)”. Author of more than 100 scientific works, including the textbook "Protection of subsoil“ and the brochure ”Subsoil Use in the Kyrgyz Republic".

The small-scale mining sector in Kyrgyzstan

The organization of the small mining industry in Kyrgyzstan will help to develop the economy of remote areas, create additional jobs and reduce social tensions. There is a possibility of wider use of local private capital, expanding the middle class of entrepreneurs