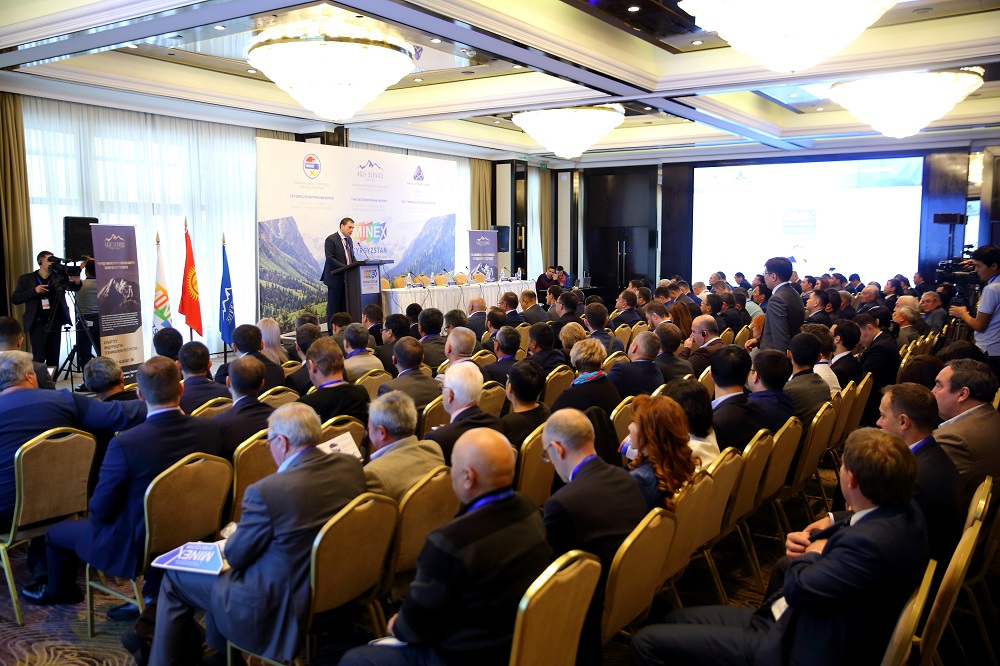 MINEX Forum, a well-known mining events platform across Central Asia, Russia and Europe – for the first time this year has a round of the forum in Bishkek, the historic capital of Kyrgyzstan. MINEX Kyrgyzstan 2018 took place on 31 October and 1 November in Bishkek and focused on ‘Regional Development through Investment’. The Forum was organised by Advantix Ltd. in partnership with the Kyrgyz Mining Association and Adji-Service LLC, and with the support of the National Committee on Industry, Energy and Subsoil Use. The general sponsor of the forum was Adji-Service LLC (https://www.adjigroup.com/), which was established in 1998, and today is considered the premier Kyrgyzstan drilling, blasting and explosives company.

MINEX Kyrgyzstan 2018 brought together around 200 delegates and representatives of 70 mining and business services companies, as well as government officials with a focus on the mining industry. During the forum, meetings were held involving the senior leadership teams at Kumtor, Kyrgyzalytn, Altynken, Alyans Altyn, KazMinerals, Kyrgyzneft, Kyrgyz New Continental, Chaarat, Chaarat ZAAB, Z-Explorer and Kyrgyzkomur. The current state and development prospects of the mining industry of the Kyrgyz Republic were discussed at plenary and technical sessions on October 31. On November 1, forum participants visited the Taldybulak Left Bank Altynken gold deposit, developed by Zitsin companies together with Kyrgyzaltyn OJSC.

The key question discussed at this year’s forum was the extent to which Kyrgyzstan represented a viable investment opportunity given the risks and difficulties faced by current and potential participants in the market.

In general terms, mining’s importance to Kyrgyzstan and Kyrgyzstan’s importance to the regional mining industry are beyond doubt. According to Komsomolskaya Pravda, mining represents around 50% of the output of industrial sector in Kyrgyzstan, and accounts for 45% of the country’s exports. Companies working in this sector, annually contribute around KGS 12 billion to the state budget and employ around 18,000 people. Nationwide, around 200 sites have been explored or are in the process of being explored.

The central focus of the mining industry in Kyrgyzstan is the Kumtor Gold Mine, which is 100% owned and operated by Canadian senior miner, Centerra, which in turn is over 25% owned by the Government of Kyrgyzstan. This year’s forum was marked by rumours that Centerra was planning to make an exit from the Kyrgyz market by selling Kumtor to a Chinese company. Company representatives and government officials attending the event were keen to quash these rumours and pointed to the various exploration works and investments in local infrastructure which had been made just this year by Centerra.

One of the key difficulties raised by forum participants was the lack of political and legislative stability. The Chairman of the Organizing Committee, Arthur Poliakov made the point that mining companies really need to have confidence that the investment climate and legislative backdrop for their investments will more or less be the same ten years from now before even contemplating making an investment.

Another issue raised during the forum was the difficulty of engaging with the local community in the vicinity of the mining projects, and the lack of trust towards investors in general. It is a common concern in Kyrgyzstan that the country’s reserves are being sold under the counter. To counter this perception, Ulanbek Ryskulov, former Chair of the State Committee on Industry, Energy and Subsoil Use spoke about the legislative changes that were made to improve public confidence, including the introduction of open auctions, so that everyone could see the process by which companies were acquiring their licences, and being made to contribute to the state budget. Recent legislative changes to modernise processes were discussed, but some industry participants were concerned that these don’t go far enough. As Aigerim Omokeyeva, General Director of Adji-Service put it, in “Kyrgyzstan, there are many contradictions in the process of securing permits. It is essential that the overlapping functions of the various ministries and state agencies be substantially reduced, and that the appropriate conditions for honest investors, who are ready to fulfil all their environmental and health and safety obligations, be created. The state should support such companies to the maximum.”

The need for Kyrgyzstan to stop relying on Kumtor and to opening up the market to smaller miners was also discussed. According to KP, it is “unreasonable and short-sighted to hope that Kumtor will continue to inflate the national budget and pull forward the economy of Kyrgyzstan, at least because the underground reserves of the mine are running out. But even the fact that no other facility can compete with the largest gold deposit in terms of its raw materials reserves does not reduce the potential of the national mining industry. Small mineral deposits for some reason have failed to attract much state attention. And more’s the pity. These reserves have the potential to give the economy a boost, according to Ishimbai Chunuev, one of the moderators and speakers at the forum.”

The event materials have been published online and provide to access presentations and publications from the event for a one-off payment of £50. This is a great way to unlock vital business intelligence concerning mining in one of Central Asia’s more promising markets. Specific, detailed presentations from exhibitors provide invaluable insight into official processes within Kyrgyzstan and the direction of travel of government policy.

This offer is open for a limited time only!

To purchase these materials, please click on the following link