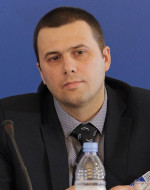 Head of an enterprise, LLC "AGR Software"In 2000 graduated Saint-Petersburg Electrotechnical University majoring in automation and control systems. In 2000-2004 studied in the graduate school in the Baltic State Technical University "Voenmeh" majoring in system analysis, control system and data processing. In 2004 earned PhD by successfully defending the thesis "Improving control over braking and acceleration of the rail transport". In 1999-2005 Rostislav Bilik worked for HC "Leninets" developing embedded software for aircraft radars and rail transport. In 2004 he became the head of a software engineering laboratory. In 2005-2010 Rostislav worked for Motorola, where in various positions (from an engineer to the acting architect of a big international project) was engaged in projects on telematics software engineering for Daimler Chrysler and Continental. Since 2010 Rostislav has been leading the AGR development project (automation of geological exploration). In 2015 the project became an independent business run by AGR Software LLC, with Rostislav Bilik as Director General.

IT toolset for smart exploration management

The keynote summarizes the successful experience of AGR Software in providing effective interaction between mining companies and their contractors which undertake drilling and geological monitoring. Nowadays, using computerized documentation systems in mining is a matter of course. They ensure that customers obtain good quality digital primary geological data. Considering that, applying such IT systems as AGR is far from being innovative. Nevertheless, making the exchange of geological data between all project participants effective is still a challenging task. As a result, there is a need for specific IT tools that would provide mining companies and their contractors with a single information space without extra costs and overcomplication. The report describes in details how the information exchange is organized in order to make geological exploration smarter, faster and more accurate.